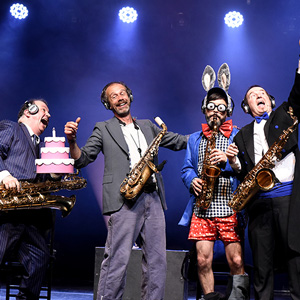 Sax is the new show by Les Désaxés.

Stories in Theatre acted as Artistic Consultants, the brief was to create a show for international touring.

During sessions with the four performers, Olivier Pierre-Noël worked on the characters and the dramaturgy. We then advised on the selection of the creative team. Throughout the R&D worshops the final rehearsals and the tech week, we advised the creative team and the producers on the artistic content of the show.

The show premiered at Avignon off 2017 (Le Nouveau Ring). Currently on an Asian tour.