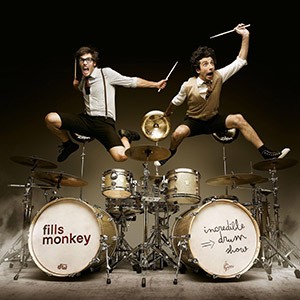 Following their successful run at Edinburgh Fringe, the show will return to the UK in 2016 for its London premiere. Details to follow.

Fills Monkey: Incredible Drum Show comes to Edinburgh for its UK premiere! ‘If there is one show to see, it’s this!’ (Le Parisien). The illegitimate French sons of Stomp meet The Muppet Show’s Animal in this mischievous drumming extravaganza. Fresh from their sell-out international tour, Sebastien and Yann blend ‘humour and virtuosity’ (Le Monde) with frenzied mayhem!  This visually spectacular show bursting at the seams with energy and originality will have you leaving the theatre on a high, air drumming your way home. ‘You can definitely play drums with rackets and tennis balls.’ (Le Parisien).

Source for the following quotes: edfringe.com.

Incredible, not to be missed. You won’t be disappointed as the show is entertaining right from the start.

Frenchies managing to make hitting drums with sticks fun and funny for a whole hour.

Absolutely fantastic show! This show is so unique, so entertaining absolutely hilarious & very very clever, & also being a music lover I really enjoyed all the genre’s they went through. At the end of the show I found myself leaping in the air in a spontaneous standing ovation wilst clapping frantically & so did most of the audience! It really is that good.

Great fun! Two talented guys with a very entertaining session for adults but which also had the children in the audience totally enraptured and shrieking with laughter. A joy to be part of.

Truly incredible! These guys are SO talented! Thoroughly enjoyed this show – such a great performance and VERY funny.

As it says in the title, this is an incredible drum show! As a drummer myself, these guys were very inspiring.

The longest queues I’ve yet seen at the Fringe: extra seats had to be added. This show is justifiably popular. Show-off drumming mixes with mimed tomfoolery. A racket with racquets, a balls-up with balls; I even saw a saw! Un-beat-able.

A really energetic performance, great noise with a real sense of humour thrown in. Having looked it up on You Tube, it gives a flavour, but doesn’t come close to the real thing.