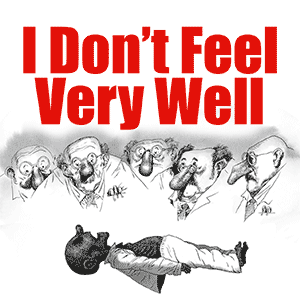 A patient collapses on the floor.

It is Doctor Galvan’s first night shift in charge of A&E as a newly qualified junior doctor.

We spend a fraught 24 hours with Dr Galvan as he runs around the hospital trying to diagnose and save the patient.

Dr Galvan, now in his 50s, retells what happens on that crazy night thirty years earlier.

Among NHS staff the day is infamously known as Black Wednesday, when junior doctors traditionally start their new jobs and hospitals can expect an increase in A&E death rates.

One actor plays 20 characters, a hilarious one-hander play about the illusions and vanities of life..

I Don’t Feel Very Well is the adaptation of the French play Ancien Malade Des Hôpitaux De Paris by award-winning author Daniel Pennac. The play was nominated for the Best Solo Performance at the Molière Awards 2016.

To be announced soon.