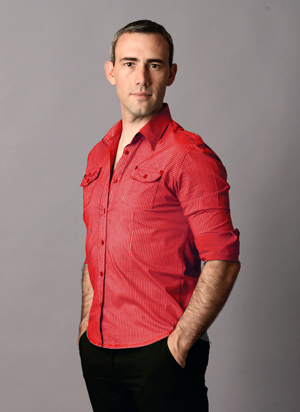 In 1998 Cédric Chapuis discovered two passions; one for comedy and the other for writing. After having a few roles in modern and traditional comedies, he started his own journey, juggling between
being the writer, actor, and director of his own plays such as “Si tout va bien, je meurs demain” (All going well, I’ll die tomorrow), “23-F Côté Hublot” (23-F Window seat), “Dans les draps de Morphée” (In the qualms of Morpheus), and “Au dessus de la mêlée” (Above the fray).

His plays get their inspiration from observing others’ work, and his valuable professional encounters. Having been directed by Stéphan Batlle (who was trained by Maurice Sarrazin) on three occasions, the influence of the Grenier School (Toulouse) can be seen in his acting.

In terms of his writing, full of the fruits of numerous master classes orientated towards creating scenarios (including “STORY” by Robert McKee), Cédric Chapuis always chooses his subjects for their humanity. He wants his plays to be true to life; funny and sensitive at the same time.

In UNE VIE SUR MESURE (french title of “BEAT”) he used to play a teenager who’s exhilarated by playing the drums. This enables Chapuis to share another of his passions with the audience, all the while honouring our differences, and what unites us as human beings.

He is now the Artistic Director of the Scènes Plurielles theatre company.

Cédric Chapuis is the Author of Beat.