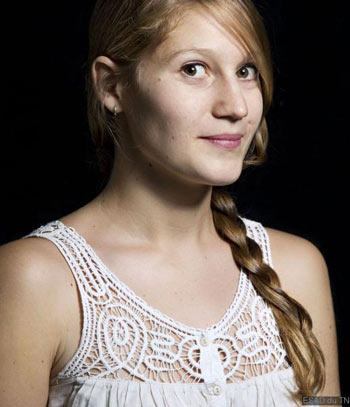 Eléonore Auzou-Connes has been taking acting classes since childhood. After the baccalaureate, she decided to follow a practical and an academic course at the same time: private classes, then the Paris Conservatoire (11th arrondissement) before the Paris Regional Conservatoire where she worked with, among others, Valérie Onis, Sophie Loucachevsky and Catherine Réthoré. She received a Bachelor’s degree from Université Paris 3 and then a Master’s degree that she obtained while working as an intern as Assistant Director with Alain Françon. In 2013, she joined the École du Théâtre National de Strasbourg where she worked with, in particular, Dominique Valadié, Thomas Jolly, Stuart Seide, Rémi Barché, Arpad Shilling, Jean-Yves Ruf, Christine Letailleur, Loic Touzé, Françoise Rondeleux, and Marc Proulx. Since she left, she has appeared in Shock Corridor, directed by Mathieu Bauer and Le radeau de la méduse, directed by Thomas Jolly. Along with two of her colleagues she has also started directing and producing Musique de Table, a variation on the score of Thierry de Mey.

Eléonore Auzou-Connes is Performer in Fishbowl.